Is it a land grab for wealthy real estate developers?? Trump’s EPA is delisting Superfund sites and absolving developers of any liability in windfall real estate project deals. 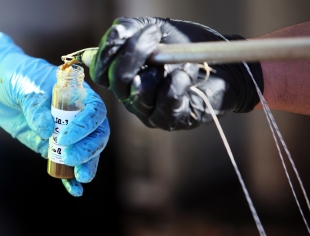 As land values surpass $10 million an acre in some areas of Mountain View, polluted sites that previously would have never been considered for development are looking quite enticing.

Federal regulators say they are finding ways to encourage private developers to swiftly clean up and restore land within the Middlefield-Ellis-Whisman (MEW) Superfund site. At a press conference on Monday morning, Sept. 9, officials with the U.S. Environmental Protection Agency highlighted Mountain View as a success story for their ability to harness the regional demand for land to help clean up the area’s longstanding groundwater contamination.

For nearly two years, the EPA under the Trump Administration has made a concerted push to refocus the Superfund cleanup program on speedily bringing polluted sites back to productive use. A pillar of this strategy is encouraging private partners who can help pay for remediation of polluted sites, said Susan Bodine, an EPA assistant administrator.

“Mountain View is one of the many places across the country where by working with local government and private sector partners we’ve successful promoted redevelopment and community revitalization,” Bodine said. “Leveraging private investment can offer a faster path to bring these sites to reuse.”

As a poster child for this growing reliance on private partners, EPA officials pointed to a Mountain View residential development at 277 Fairchild Drive. The 26-unit housing project is located just south of Highway 101, right on the MEW toxic plume, where vast amounts of industrial solvents like TCE , a known carcinogen, were dumped decades ago by semiconductor factories. While the contaminated groundwater isn’t part of Mountain View’s drinking water supply, its toxic vapors can seep into buildings where they can concentrate to unsafe levels.

To move the project along without further delay, EPA officials signed an agreement known as a “Bona Fide Prospective Purchaser” deal to help provide legal cover for the developer, Warmington Fairchild Associates. In basic terms, so long as Warmington took a number of good-faith steps to clean and mitigate the toxic hazards, the company would be shielded from liability for building on the Superfund plume.

A similar Bona Fide agreement has reportedly been secured by Google’s subsidiary Planetary Ventures as the company begins a $157 million effort to restore Hangar One at Moffett Field. EPA officials say they also expect to strike a similar deal with NASA Ames on its plans to build nearly 2,000 new homes on Moffett Field’s southern side.

The EPA has sanctioned a number of steps to mitigate the TCE contamination. For years, the companies charged with cleaning up the mess have focused their efforts on pumping and treating the groundwater. More recently, EPA has supported alternate tools, such as special microbes or bio-augmented trees that can filter out hazardous compounds.

The EPA has been highlighting its successful partnerships to clean up sites across the U.S. to mark the release this month of its final strategy plan for Superfund sites. The Mountain View press conference on Monday was reportedly one of 10 similar events scheduled across the country.

Under the Trump administration, the EPA has promoted its ability to quickly “de-list” Superfund sites, essentially declaring that all the necessary cleanup is complete. In 2018, EPA administrator Andrew Wheeler touted that he was closing the books on 22 sites, the highest number in recent memory. EPA officials are forecasting they will de-list at least 22 more sites in 2019.

Nevertheless, the Trump administration has routinely targeted the EPA for the deepest cuts across federal agencies. For the upcoming fiscal year, the environmental watchdog is once again at risk of losing 31 percent of its funding.